The second day we woke up early and went on a tour to the Cu Chi tunnels, the tunnel system that was used during the Vietnam War to take over Saigon. There are over 250km of tunnels, each dug out by hand over many many years. The tunnels are three levels deep, with huge rooms underground. The first level is only 3m deep, and they connected to the trenches that were used for fighting. The second level is 6 to 9m deep, and the last was 12m below ground. They were actually started during the French rule, but were not used extensively until the Vietnam War broke out. 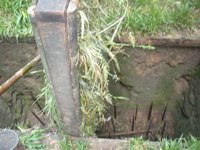 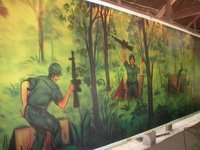 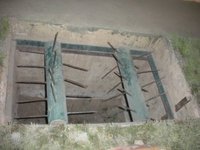 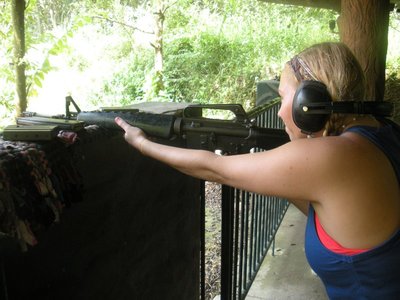 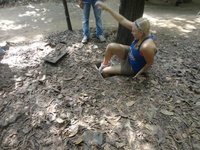 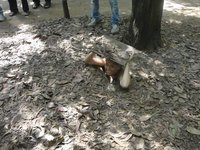 We got to watch a video about the history of the tunnels, about 10,000 people lived in them at one time in the war, including entire families with small children. Then we got to see some of the traps the Vietnamese used in the war to escape the Americans, which were really gross to see. I certainly wouldn't have wanted to run into any of them. In the background of traps, there were paintings of American's falling into them and bleeding on the ground (once again, a highly biased version of the war similar to the museum.. you think I would have been used to this by now).

Next we got to go to the shooting range, where old guns from the war were set up for us to shoot, including AK47's. This was actually really cool to do, we had a lot of fun here.

And last we got to climb through the tunnels, which are so small they require you to crawl through them and are pitch black. It was really fun, but we were really dirty by the end of the day. It is hard to describe how tiny these tunnels are, I could barely fit into some of the entrances. The little hole in the ground only a few of the girls were allowed to go into, apparently in the past people have gotten stuck half way in and had to be pulled out by all the workers!

They have widened out some areas of the tunnels so that tourists can fit, and even those are tiny! This is the entrance for the bigger tourists, rather than lowering yourself into a small cutout in the ground, and here are the bigger tunnels... which aren't much bigger. 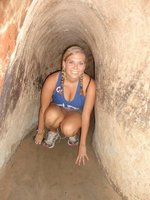 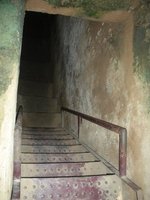 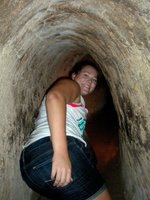 We ended with some lunch before arriving back in Ho Chi Minh City for the afternoon. After we got back and got cleaned up, we shopped at a market in the middle of the city, which had hundreds of shops all around and was similar to the market in Cambodia. And late that night we flew up to Da Nang on our way to Hoi An.

Posted by Cassi 04:30 Archived in Vietnam