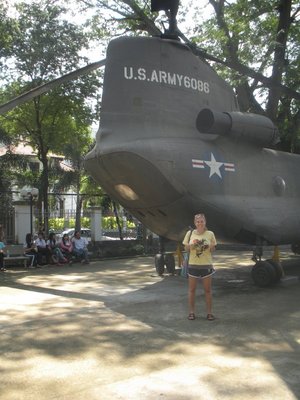 Our first stop on the trip was Ho Chi Minh City, formerly known as Saigon. Kourtney and I didn't know what to expect with Vietnam, but were very pleasantly surprised with what we found. The city was clean, there was a bunch to do there, and our hostel was amazing. We arrived at 8am, dropped off our backpacks, and then went for a walking tour of the city thanks to the help of the hostel owner. He gave us a map, drew out a walking route, and sent us off for the day.

First was the War Remnance Museum, which houses Planes, Helicopters, Tanks and other vehicles all used during the war. In this part of the world, the Vietnam War is known as the "American War". It was really interesting to read about the events in the war coming from the Vietnam Perspective.

Today Vietnam is still a communist country, still with no freedom of speech or various other rights that we take for granted everyday. The government controls everything that is printed, on TV, and online. They even have loud speakers set up on every telephone pole in the city, and make announcements throughout the day (we have no idea what they mean because they are in Vietnamese).

With that being said, the description of the war was Vietnam against the US, with Vietnam fighting as a united front with only a few rebels on the American side. It was hard to read and see some of the things they have on display, as you can imagine it was very Pro-Communist Vietnam and Anti-American forces. But it was still very interesting to see. 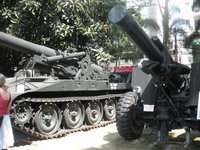 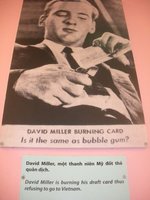 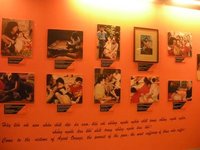 I had to laugh when I found this description of the museum online, it is 100% the way I reacted to the museum too:

The museum was opened in a hurry, less than five months after the fall of the South Vietmanese regime. It has moved to new premises with 3 stories of exhibits and various U.S. military hardware (tanks, jets, helicopters, howitzers) on display outside the building. This disturbing display of man's cruelty during the Vietnam (American) War includes halls full of gruesome photographs, a simulated "tiger cage" prison and jars of deformed foetuses attributed to contamination by Agent Orange. There is very obvious bias as there are no "records" of any unpleasant deeds having been committed by the North Vietnamese Army.

We continued our walk to the Reunification Palace, which is massive, with a huge beautiful lawn and trees all around. It was the capital building for the South during the war, and the war officially ended when a tank from the North came through the gates in 1975. There is a replica of the tank sitting out front of the Building, just to the right side of the front lawn. After that we saw the Central Post Office, which is a very old building in the middle of the city, and an old Notre Dame Church left over from the French rule. Here's a few pictures of the old buildings left scattered through the city. 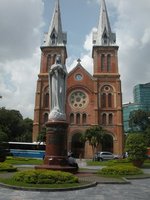 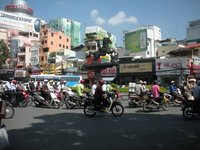 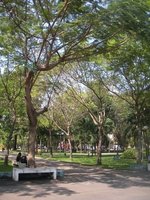 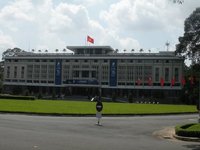 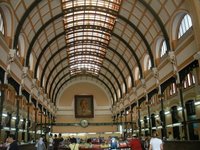 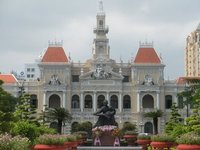 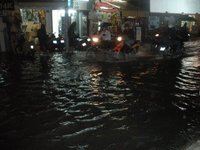 After getting some lunch we returned to our hostel just as it began to rain, checked into our rooms and waited for the rain to pass... which never happened. The entire city flooded our first night there, with the streets turning into rivers, and motorbikes driving through them splashing anyone walking by. We went back out into the rain and got some dinner and drinks at a little place near our hostel, and met a bunch of other backpackers who were trying to wait out the storm. It ended up raining all night, and so we eventually turned in and walked back to the hostel through the flooded streets. Overall, we were very impressed with Ho Chi Minh City.

Posted by Cassi 19:12 Archived in Vietnam