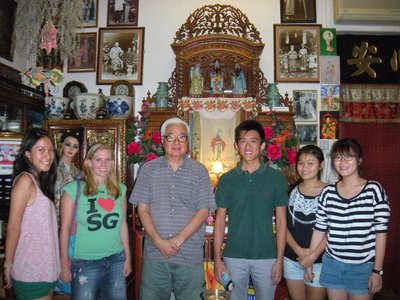 Saturday I spent the day in Katong, a residential area by the sea on the east coast of the island. For my Southeast Asian Studies class we are doing a group project on Peranakans, a culture group living in Singapore. The word Peranakan is used to describe people who moved to the Straights region (Malaysia and Singapore along the Straights of Malacca) and then assimilated with the locals. Unlike Chinatown and Little India, these people have kept some of their own culture, but married into local families and picked up local customs too. There are four groups of Peranakans: Chinese, Indian, Arab, and Eurasian.

The history of the four groups is really interesting because they keep traditions alive from their home countries that aren't around in many places today. For example, we interviewed a Chinese Peranakan, whos family left China 7 generations ago. When they left, Mandarin was not the common language in China, each province had it's own language. So his family to this day speaks ancient Chinese, and he doesn't understand a word of Mandarin! Also, in his family they have kept traditions like weddings and funerals from China, but they have converted to Christianity from living in Singapore.

The reason this group is different from other immigrants is the traditions they keep alive. They build their houses to match those built in China, and they live a traditional Chinese lifestyle. China today is very different than it was 7 generations ago, so Peranakans are keeping culture and traditions alive that have died out even in China where they originated. One person told us being a Peranakan is a choice, if you don't live by traditional standards, then you are no longer a Peranakan regardless of how you were raised, and on the flip side, someone of Chinese decent can become a Peranakan if they choose the lifestyle. 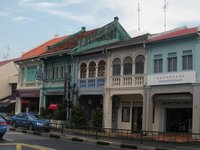 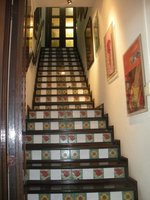 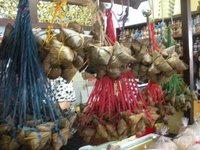 Posted by Cassi 20:00 Archived in Singapore