I have been playing with the Eusoff Hall Floorball team in preparation for Inter Hall Games. Floorball itself is a mix between street hockey and field hockey. The sticks are shorter than ice hockey sticks, going just above waist level. The ball we play with is almost like a wiffle ball, with holes cut in it. The rules of the game are like street hockey: there are no offsides rules, no icing rules, and no checking, but there are also some field hockey rules thrown in: no hacking, no kicking the ball, no lifting your stick above your waist.

Our team basically reminds me of a pick-up street hockey game from when we were little playing in the Circle. No one really knows where to go, we don't have any plays or any coordination, but everyone has a lot of fun. We use nets that look identical to the old red plastic nets everyone in the neighborhood had. Although there are supposed to be forwards and defense, it seems as though everyone just runs around and plays every position, just like our pick-up games.

When I first showed up to play, I didn't have a stick so they let me borrow one from the Hall. I told the leader of the team I play ice hockey and field hockey, but no one else really knew why I was there. Then when we started shooting to warm up our goalie, they all asked how I knew how to shoot so hard! I thought that was really funny because at home I don't consider myself to have a very hard shot, but in floorball I'm pretty good. Because we play with a ball, there is no such thing as a wrist shot. Every shot is basically equivalent to a hockey snap-shot.

Overall I really enjoy playing, being on the team is how I met most of the people living in my hall. We practice twice a week, Mondays and Wednesdays, and they are starting to add Friday Practices. Inter Hall Games don't start until January, so for now we are just scrimmaging among ourselves.

Last night was Syakinah's Birthday, a girl on my team, so we had a cake for her and took a picture of the group of us. The front row of girls are all from Floorball, along with most of the girls in the back. A few of the guys coach our team and help out at practices. A few people in the picture aren't involved in floorball but came down for the celebration. This was taken right at the end of a 2 and a half hour practice, so don't judge how sweaty we look! 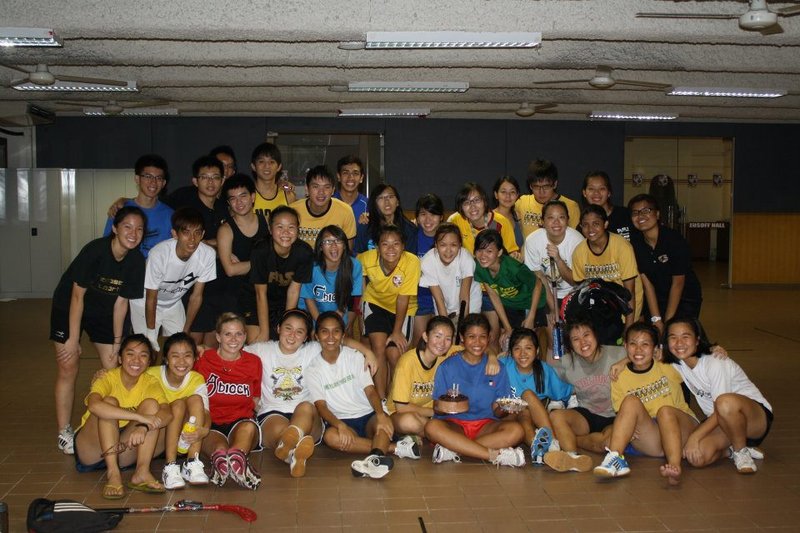 Posted by Cassi 01:43 Archived in Singapore