Today I did a whirlwind tour of Singapore's best museums: the National Museum, the Art Museum and the Asian Civilizations Museum. The best part about being a local student is free admission to all! All the museums were beautiful colonial style buildings right in the middle of the city. 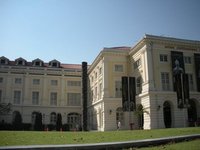 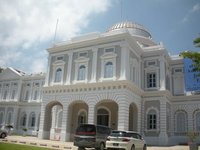 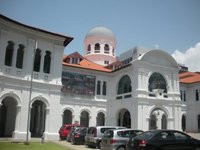 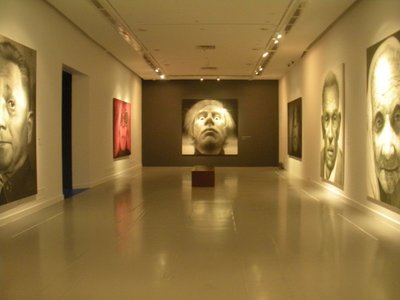 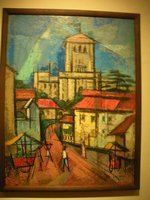 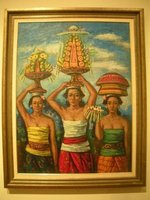 I started at the National Museum, which was divided into 5 areas: The History Gallery, Film, Photography, Food and Fashion.The history area was the biggest, and the most interesting. I was given a headset, and as I walked into each room a new recording would describe everything in the area which was very helpful. I watched a movie about old Singapore, which used to be named Tamasek, and how it was once ruled by kings until Rajahs from India came, then the Portuguese came, and then many other people over the years "discovered" the island. Thomas Raffles, the British explorer who claimed the land as a British Colony, actually did so against British orders, was punished for his actions and when he died he was still in debt! I think that's amazing considering today he is described as a hero, and the British gained so much from his actions in Singapore. The History area ended with the Japanese rule during World War II, when the British tried to come back and reclaim the island. The people were not happy with the idea of being under colonial rule when the British couldn't even protect them in the war! So they had their first formal elections and the kicked the British out.

The other 4 areas are modern accounts of Singapore, from the 50's until today. They had the history of hawker centers and street food, and how it became such a national icon. They had displays on fashion relating to women's rights and the shift from at-home workers to modern day. They had old Singapore films-which are hilarious to watch (they remind me of the old Chinese Martial Arts films with really bad acting). And lastly they had displays of fabrics made over the years in Singapore- beautiful colors and designs.

After the National Museum, I walked to the Art Museum. There was a really cool display by Hyung Koo Kang called "The Burning Gaze". It was huge portraits of people staring into the camera; political leaders, celebrities, and average citizens from around the world. It was almost scary to walk through the rooms, but was really cool photography. They was also a display of Liu Kang, which featured paintings that I would love to have in my house. They were mostly landscapes and people from Southeast Asia, done with bright colors. There were a few other exhibits, but those two were my favorite ones.

And lastly I visited the Asian Civilizations Museum, which houses artifacts from all over Asia. It was divided up by region: Southeast Asia, China, Middle East and India. The displays in the Southeast Asia section were similar to the museum in Cambodia- sandstone sculptures of ancient gods and old wood carvings. China, however, had the coolest display of the day: Terracotta Warriors. Luckily this was the last day of the exhibit and I was able to see them all- they had 7 warriors, 1 full size horse, and several smaller statues found in China. They are much bigger in person than they look in pictures, and I can only imagine seeing them all lined up at the site in China. They were really interesting to see. 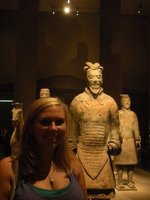 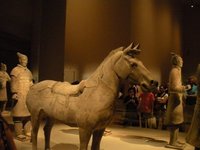 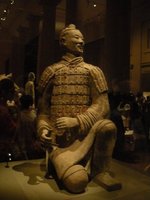 Posted by Cassi 18:31 Archived in Singapore