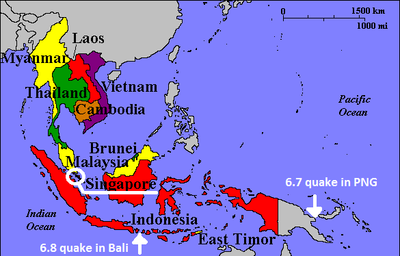 In the last two days, there have been major earthquakes in both Bali, Indonesia and today in Papua New Guinea. The Bali quake was recorded at 6.8 and the PNG quake was recorded at 6.7. Luckily neither have triggered a tsunami, and no deaths were reported in Bali or PNG. Just to show where exactly in the region these quakes have happened, they are labeled on the map.

While it may not look like it, Southeast Asia is a huge place. Bali is over 1050 miles from Singapore, which is about the distance from NYC to Miami, and PNG is over 3080 miles away, leaving from NYC that would put you somewhere between Juneau and Anchorage, Alaska! Singapore has not been affected by any earthquakes in my time here, and is usually safe from natural disasters because of its location.

The 2004 Earthquake and Tsunami in Indonesia, one of the deadliest natural disasters ever recorded (killing over 230,000 people in fourteen countries), occurred just off the west coast of Sumatra, Indonesia. In comparison, it was only 500 miles from Singapore, and it had barely any affect on the country. Sumatra is a huge island in Indonesia, and acted as a blockade to Singapore and Malaysia from the waves. Sumatra, Thailand, India and Sri Lanka took most of the brunt of the tsunami, while other areas were largely unaffected. Indonesia is considered one of the most active countries in the world, between earthquakes and volcanoes it seems as though the country is always dealing with a natural disaster in one form or another!

Posted by Cassi 16:56 Archived in Singapore