Sunday morning we spent at the Shelter. I would describe this as more of an orphanage because the girls take classes, eat and sleep all in one building. There is a room on the bottom floor where the girls have Art, English and Khmer classes, a little library area, and a computer section. The computers look like they are from the early 90’s, but recently some ‘newer’ laptops were donated to the shelter so they will be replaced soon. There is also a kitchen and eating area on the bottom floor. Upstairs are the girls bedrooms, where 6 or more girls share each room, and the bathrooms. There are bunk beds pushed against every wall, trying to give room for as many girls to live there as possible. 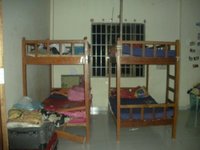 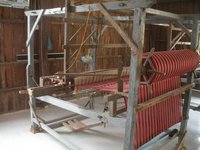 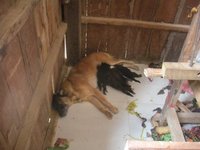 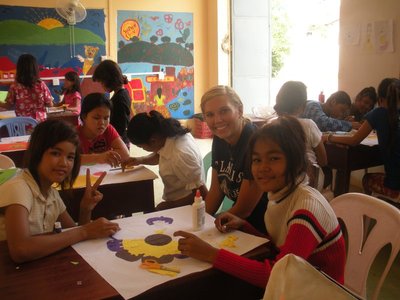 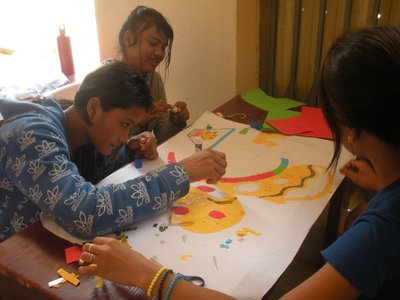 Outside there is a second building which houses sewing machines and weaving looms. The girls are learning trades that will be able to support them when they move out and into the world. The patterns they make are beautiful, and they use the fabric to sew dolls and toys for other children. They sell the cloth in the markets some days, and have made pillowcases from them as well. A surprise in the corner of this room was a dog with 5 newborn puppies. There are stray dogs all over Phnom Penh, with the shelter being no exception.

The girls themselves have each been through so much in their lives, with almost all of them suffering from physical abuse in childhood. Some have been rescued from the sex trade, some were found supporting themselves living in shacks in the country side, some were even abandoned in markets as newborns. One girl is deaf, one is missing some fingers and toes, and many have lasting scars from various events in their lives.

With all of that being the case, these girls were all fun, energetic, and very welcoming. The first day they were asking me all about my family: if I had a mother and a father, any brothers or sisters. Because most of them have been separated from their families completely I think it was fun for them to hear about mine. They asked me about animals I liked, my favorite foods and where I have been in the world. They tried to teach me the colors in Khmer because this was all during their art class, but they were all laughing at me. Apparently the word for ‘purple’ in Khmer sounds very similar to ‘monkey’ and I could never get them correct!

In the afternoon an American man met us at a bookstore where the girls were able to buy pens and paper and other school supplies for the year. He paid for all the girl’s books, and even let them pick out more when he saw how low the first bill was. The girls were in the store for like an hour, testing out all the different color pens and drawing on each other to make sure they worked. They were all very excited to be able to pick out new notebooks for their school work.

Sunday night I met up with Leah, another one of Alex and Ann’s children who is living in Phnom Penh. She took me out for some drinks, we walked along the waterfront downtown and took a TukTuk to a restaurant for a late dinner. She told me all about her life growing up in Thailand and then moving to Cambodia, told me about the places she thinks I should visit before I go home, suggestions for weekend trips and even told me some of her old friends I could meet up with around Thailand.

Posted by Cassi 20:43 Archived in Cambodia