No tickets? No Problem

Sunday night we stayed in the city for the Formula 1 race, hoping to catch a glimpse of the race. Without tickets it was impossible to see the course, they had lined every fence and barrier with tarps so you couldn't even peak through. Our next plan was to go up to the Marina Bay Sands pool, and look down on the race from the top. We were in the elevator on the way up, when we saw the sign that read "On Sunday Sept 25th, Residents must show their Wristband for Pool Access due to the F1 race" which ruined our plans for that. So we ventured back out to the city to the DNA Helix Bridge where we were able to see across the water to the National Day Float area. We could see two turns of the race, plus a glimpse of some other areas.

We watched the first half of the race from the bridge, about an hours worth of cars zooming by, before we decided to try Marina Bay Sands again. We went up to the top of Tower 1, and rather than go out to the pool we stayed on the inside and were able to watch through the huge glass windows at the top. We could basically see the entire track from where we stood, except for the start and finish line. We watched from here for the next 20 mins or so, and then went over to Tower 3, and found a view of the finish line. 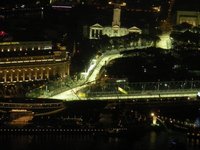 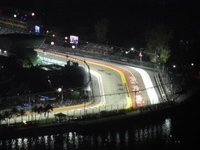 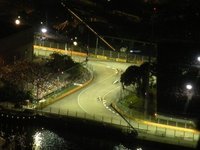 For not buying the couple hundred dollar tickets, we got to watch almost all of the race, from all different views. We were happy we could see as much as we did, and actually may have gotten better views than some of those people who had tickets inside the fenced areas.

Posted by Cassi 07:30 Archived in Singapore