We flew back to Singapore late Saturday Night, and on Sunday we got up to go into the city. Sunday was the Formula 1 Grad Prix in Singapore. This means downtown was packed all day, with barriers set up around the city, and streets closed for racing. We took the MRT down to Little India, and slowly worked our way towards the city center as the race neared.

Little India is a region within the city similar to Chinatown, but with crafts and fabrics from India, and Hinduism is the major religion of the area. We saw another Hindu Temple, and the area was decorated for the Deepavali Festival. 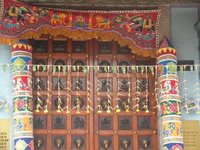 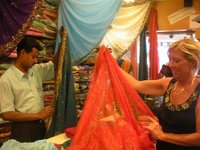 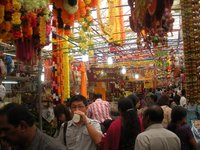 Deepavali or "Festival of Lights" is annually held in November to celebrate the triumph of Lord Krishna over the evil Narakasura. Lord Krishna symbolizes goodness while Narakasura represents evil; that's why it concerns with "lights," which clearly depict purity. So to speak, light will always win darkness and good can always conquer evil. Deepavali is considered a most important day of Hindu calendar, and is arranged in Little India, another ethnic area of Singapore. It's times for rejoicing and renewal of especial Hindus and Sikhs. Of course, oil lamps play a unique part of this festival as it is believed that there are spirits of departed relatives who come back to earth and so the lights are the guidance for those wandering souls to their subsequent world. For the Indians, this festival is like a New Year celebration, while they welcome relatives and friends at their own homes for exchanging some blessings.

Everything in Little India is brightly colored, with a lot of flowers and elephants and sparkles decorating almost everything. We walked through the shops, and I found a tapestry with an elephant embroidered into it. With the lack of decoration in my room, I thought it would be perfect so I got to rearrange the few pictures I had on my walls to make room. Now my room isn't so bare, and actually is starting to look like a place I would enjoy living. 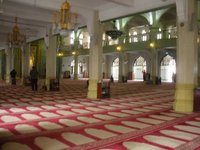 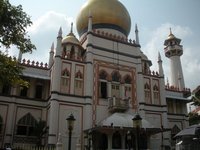 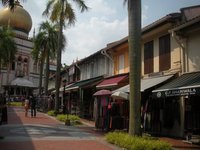 From Little India, we went to Arab Street, which is like Chinatown except with Middle Eastern carpets, lamps, and crafts and a wide Muslim community. Arab Street is lined with small shops, much like the other regions, and has a absolutely stunning Mosque at the end of the street towering over anything else around. It is a beautiful building with a gold top and white sides. It reminds me of the Taj Mahal or the palace from Aladdin. 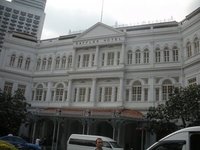 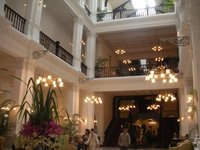 From Arab Street we went to Raffles Hotel, the oldest and most expensive hotel in Singapore. It is left from the Colonial Period of the British, and is all white with orange roofs like the other colonial buildings in the city. This is the home of the Singapore Sling drink, and is also the hotel where the last ever wild tiger in Singapore was killed, making it very famous.

And Lastly as we walked to the F1 race we saw St. Andrews Christian Church located right in the center of the city. In fact, the race went on two of the four roads surrounding the church, so we could hear the cars while we toured and they were LOUD!. We were hoping we could see the race from the church, so we tried going up to the second story but the barriers were too tall to view over.

Now it was time to find a place to watch the race from... 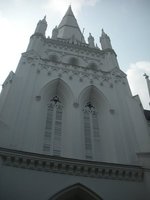 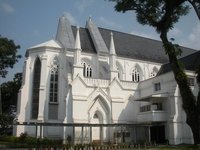 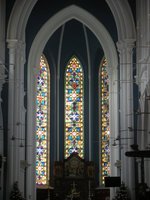 Posted by Cassi 22:25 Archived in Singapore