Climbing aboard a Shipwreck

An abandoned ship in the Indian Ocean 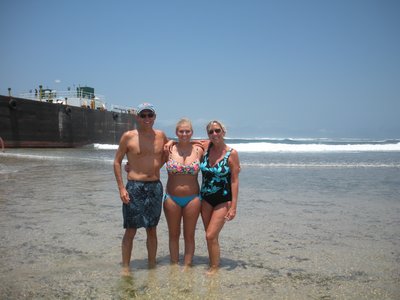 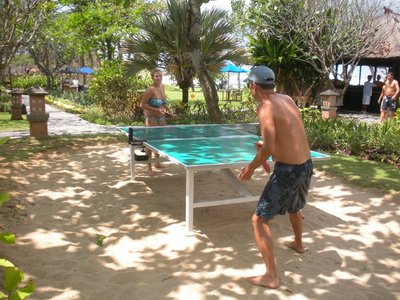 Friday we spent most of the day at the beach, just relaxing and swimming in the ocean. Straight out from our resort was crystal clear water and a coral reef with beautiful fish. After getting goggles we swam out and saw a ton of fish, of all different colors. The currents around Bali are very strong, so we had to start at one end of the reef and drift down to the other before swimming back to shore and starting again.

Down the beach to the left, out in the water about 150m was a huge ship that had gotten stuck on the reef. There was a very low tide around noon, so people from all the resorts were walking out through the water to the ship. When we got out there, there was a rope ladder leading up the ship so we climbed up. From one side, the ship had a beautiful view of our resort and beach, and from the other side there were perfect view out into the ocean. There were some surfers out past the ship that we watched, and the waves were hitting the ship and splashing up onto the deck. 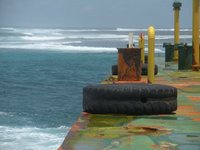 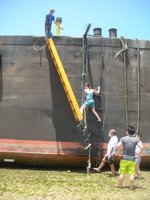 On the walk from the beach to the ship, there was rocks and coral all around. Within the coral areas there were little sea stars swimming in the water, as well as some type of eel or sea snake thing. Because the tide was so low it was like a tidal pool for the creatures to swim in.

We also played some more ping pong, which I dominated in, and got some lunch by the pool. Everyday we fed the fish in the lagoon, which brought over birds and the monitor lizards, so we spent some time watching them swim around too. Vacations are meant for relaxing, and Friday was definitely a relaxing day. I fell asleep on my beach chair, woke up occasionally to swim in the ocean and flip over to avoid sunburns, but otherwise we really did nothing. It was perfect. 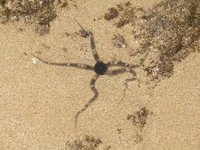 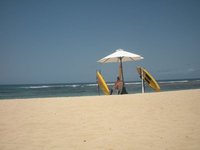 Posted by Cassi 13:04 Archived in Indonesia