My Parents First Day in Singapore 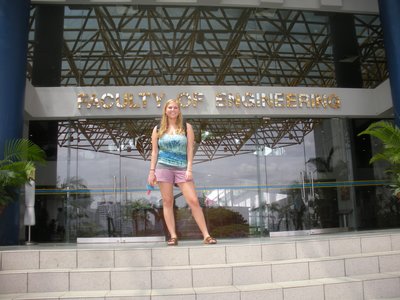 My Mom, Dad and I spent their first full day in Singapore touring campus. They got to see my room and dorm, the Faculty of Arts, Faculty of Engineering and Faculty of Science. I had one class in the morning, and they used the time to visit the bookstore. The campus at NUS is much bigger than Clarkson, so it took a few hours to get all around and see the different places I spend my time.

After they saw where I live, take classes, and spend my time, we took the public bus system out to the Botanic Gardens for a calm afternoon. Luckily, between all my friends at NUS, and all their friends and family who had already visited, our group had a few extra EZlink passes floating around. That allowed us to all use the MRT and Bus system for the week, before giving the cards to the next visitors within our group of friends!

We spent a few hours walking through the gardens, and they even got to see their first Monitor Lizards! Even though the one we found was just a baby and a little over a foot long, they still thought it was huge. The Botanic Gardens remind you that Singapore is a jungle, and outside of the actual City Center you can still find the plants and animals that used to cover the island. My dad was amazed at how big the leaves were on all the plants, some were bigger than he was!

After the Botanic Gardens I ran back to campus for one more class while my parents took a nap and spent some downtime at their hotel. We spent the evening at the Night Safari, where we saw a fire breathing show, creatures of the night show, and took a tram ride through the park. Some of our favorite animals were the Slow Loris, the Giant Crocodiles, and of course all the different types of Jungle Cats. We really enjoyed the Night Safari because they have animals that generally aren't found in Zoos and are from this side of the world. 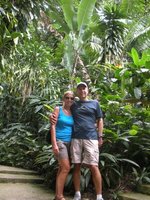 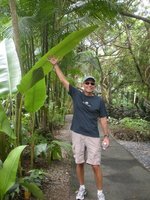 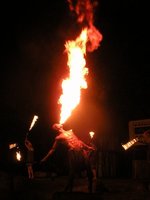 Posted by Cassi 10:02 Archived in Singapore