11km Hike Through the Trees 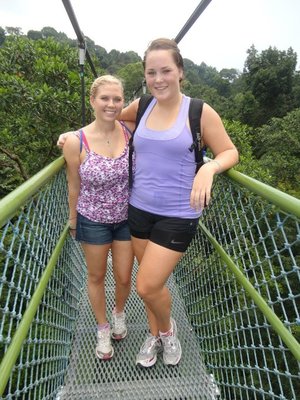 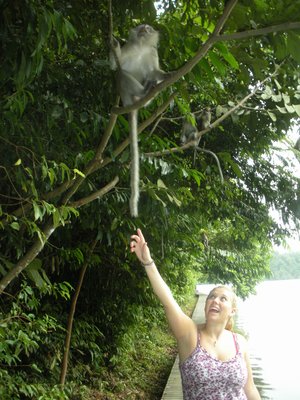 Today Kourtney and I went to Macritchie Reservoir for a hike through the jungle of Singapore. There are several different trails through the woods, some just around the waters edge and some up to the highest peak on the Island. We hiked for about 11km (just under 7 miles) to the top of the mountain, where they have a suspension bridge out over the tree tops to a second mountain. Just as a point of reference, these 'mountains' are not Vermont mountain size, but rather more like hills. Regardless, the view was really nice from the top, out over the top of the trees in the jungle. 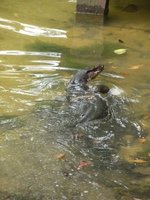 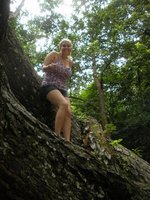 After the bridge, we decided to hike down to the reservoir where there were beautiful views of the water. This part of the hike was along a boardwalk, and there were trees hanging out over us and the water. Monkeys were climbing all over, and even walking along the boardwalk with us. Also, in the water there were monitor lizards swimming around. These are the biggest lizards I've ever seen, and we even thought they might be alligators at first. They were about 4 feet long, and had huge tongues. The monkeys were climbing down and screeching at the lizards when they came close to shore. It was a very interesting hike and we had a lot of fun being in the middle of all the animals.

After we left the monkeys and lizards, we found some trees that were really easy to climb so we decided we had to give it a try. These were down by the Macritchie Park, a public park area with open areas and benches and pavilions. Although the hike was pretty long, it was a cool day by Singapore standards and was even sprinkling for parts of it, which felt really nice. Overall, we really enjoyed being outdoors and seeing the jungle.

Posted by Cassi 01:50 Archived in Singapore