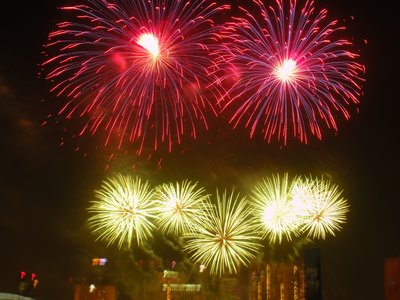 This year Rag and Flag was on the same day at the National Day Parade, Singapore's Independence Day. Tuesday was the 46th anniversary of their independence from Malaysia, and they had a huge celebration in the Mariana Bay area. For both Rag and Flag and the National Day Parade, NUS set up a huge area just for students with bleachers, loud speakers and a big screen to watch the Parade on. Local's must enter a lottery to try and receive tickets for the celebration, otherwise you cannot watch it. A local student told me it is lucky to see it even once in your lifetime, but they broadcast it on national TV for everyone else.

"Parade" is a very lose term for the celebration. It was more of a show for the people of Singapore about their nation. They have a few divisions of the military march across the stage at the beginning, which is why they call it a parade, but it was mostly singing and dancing and the story of Singapore's history. I actually learned quite a bit about the country, and there was even a rap about the new subway system.

After the show, which was about an hour and a half long, there were amazing fireworks all around the Marina Bay area, with lazers and music and everything. Fireworks were mostly set off from a barge in the middle of the bay, but were also lit from the tops of all the skyscrapers. This was really cool because they literally surrounded you with fireworks.

Posted by Cassi 17:58 Archived in Singapore