Giving back to Singapore 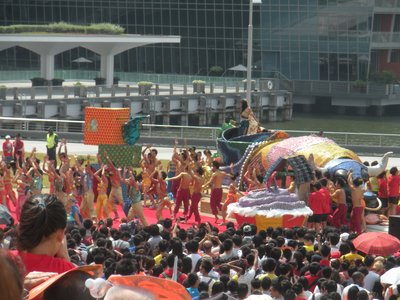 NUS has an annual community service project that gives back to local groups in need. The event is actually a 2 day-2 part celebration called Rag and Flag. It was such a cool experience to witness, and it is so widely accepted across campus that over S$509,944.80 (~$421,000 USD) was raised last year, numbers have not been announced for this year yet.

Flag
Flag Day was on August 3rd this year, and students and faculty from all across campus took to the streets of Singapore and asked for donations for different charities. Each of the dorms compete against the others in hopes of raising the most money. Also, individuals who collect the highest get really cool prizes like iPads. The students really care about giving back to Singapore, so almost everyone participates in Flag day. 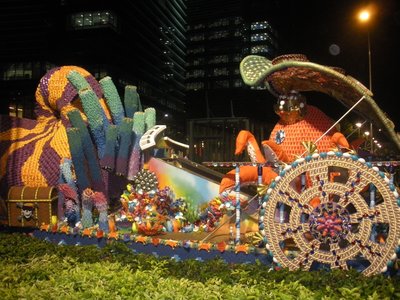 Rag
Rag Day is the day students show thanks for all the donations from the public. They do this by putting on performances for the public to come watch. Each of the faculties and halls build a float, choreograph dances and design their own costumes to get ready for this. Hundreds of hours of work goes into each float, and once again it is a competition between the halls and faculties to see who has the best. The floats are all made of 100% recycled material/trash. For example, the Faculty of Engineering made a float using old soda cans. The choreographed dances are each about 8 minuets long, and involve a ton of different people, costume changes and they even do stunts. It was unbelievable to watch.

Overall it was a very fun day. I honestly can't imagine schools in the States doing something like this and having it be as successful as NUS's was.

Posted by Cassi 16:52 Archived in Singapore