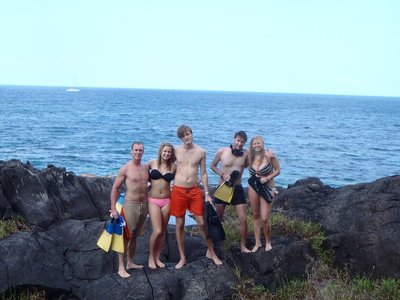 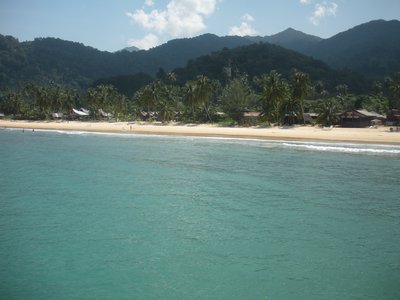 When we first arrived at Tioman we checked into our individual chalets, 3 people to a room. Everyone was so tired from the trip that we changed into bathing suits and went to sleep on the beach! At the time it seemed like a great idea, but when we woke up sunburnt a few hours later we realized it probably wasn't the smartest thing to have done. After our naps, we all went swimming in the ocean which is actually part of the South China Sea. Much like Sentosa, the water here felt like bathwater but here it was perfectly clear and extremely beautiful.

In the afternoon 6 of us decided to go Snorkeling at a reef just off shore, and it was amazing. There were a ton of fish, and the coral was really bright colors. We saw ‘nemo’ fish, a few sharks, a string ray, sea cucumbers and lots and lots of other brightly colored fish. After a few hours at the reef we decided to go pier jumping. The pier that our ferry docked at was right off the beach from our hotel, and we went to the end and jumped off into the ocean! The guys we were with were doing backflips and all sorts of dives, but it was actually quite high so none of the girls tried anything like that. None the less, it was a lot of fun.

After spending all day at the beach, we had to spend some time in our room. This is when we realized that our bathroom was being shared with lizards, who could come and go as they pleased through cutouts in the walls. For the rest of the weekend we called our bathroom the "lizard portal" because there were so many of them around! Besides the lizards, the toilets were actually very nice. At the ferry dock and other various places throughout the weekend the toilets were just holes in the ground, so we were very happy when we saw western toilets in our room.

Dinner was provided for us each night, and a party was also included afterwards on the beach. The person who organized the trip did an amazing job. Everything was taken care of for us: Transportation, Accommodation, Food and all Drinks. We went to a place called the Malaysian Surf Centre, and it was owned by a guy named Tim who was from Australia. He was a total surf bum who has spent his life traveling around Southeast Asia. It was a really cute place, and we stayed there basically all night. Overall my first day in Malaysia was amazing! 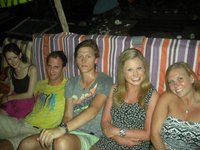 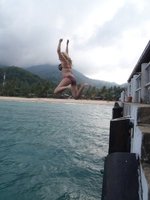 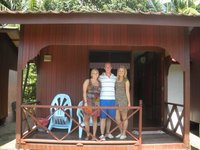 Posted by Cassi 10:14 Archived in Malaysia