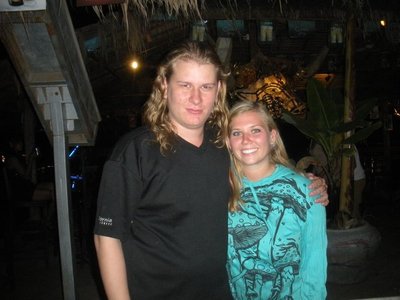 Downtown Siem Reap has several different areas: Markets, Restaurants and of course, Pub Street. Pub Street is one road full of all the best nightlife, restaurants, clubs and bars. After my second day exploring the temples, I took my bike into downtown Siem Reap and met up with Paul. He is another one of those distant, not quite related to me "cousins" I met while in Asia, through my actual cousin and his wife.

Pub street is filled with shops open throughout the day, but after people start heading home from the temples around sunset, this street really fills up. It has several bars, including the famous Angkor Wat? bar (which is an awesome name in my opinion) and Xbar, where I spent my night.

First, Paul and I went out to dinner at an amazing Mexican Restaurant (yes, an amazing Mexican restaurant in the middle of Cambodia). Since leaving the US in July, I had only had Mexican one time and that was when my parents came to visit and we went out the Holland Village in Singapore. This was such a treat, after biking around the temples all morning I was ready for all the comfort food I could find, Mexican was perfect.

Getting to talk to an American who grew up outside of the States was a very interesting experience. Having such a different background and such different world views proved for exciting conversation. But at the same time we found we had a lot in common too. Paul said he had always wanted to travel to Vermont for the snowboarding and winter season, we both liked similar movies and of course we talked about traveling Southeast Asia. However a big difference between us: Paul can speak Cambodian just like James could, and once again I had to laugh when I heard the transition from English to Cambodian without any hesitation.

After dinner, Paul's band was playing at Xbar. This bar was all open air on the third story, and even had a half pipe for skate boarding on the roof! Just like all of my travels, I met people from all over the world at this place, with some amazing stories. Overall it was a great night, and I'm glad I got to meet Paul and see the town with him.

Posted by Cassi 16:50 Archived in Cambodia