And the Temple of the Emerald Buddha 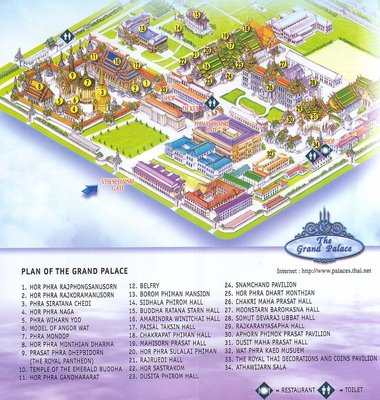 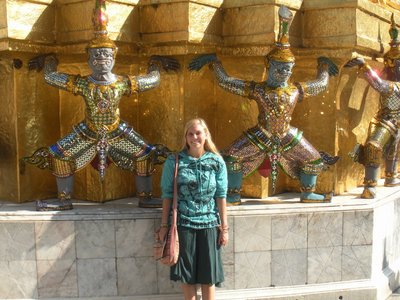 The Grand Palace is within walking distance from where I was staying on KhaoSan Road, so I took a day to explore the home of the Siam King. Although the current King doesn't live there, this Palace is an amazing sight. Everything appears to be covered in Gold and Jewels, and the sunlight reflecting off the walls made everything look spectacular.

When I say I took a day to explore, it really took the whole day. There are several different buildings in the complex, so I've included a map below to walk you though my day.

I started my tour where the arrow is pointing on the left side of the map, and walked along the gardens and eventually turned left towards the temples in the top corner. Here there are several different buildings, including the Temple of the Emerald Buddha. I spent a few hours just in this area, looking at the detail carved into each building, and the colors painted on each wall. The Temple of the Emerald Buddha was packed with people. 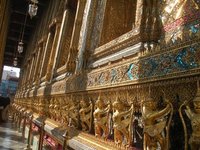 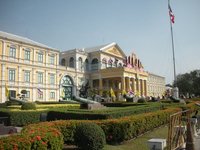 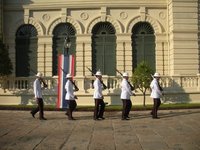 The legendary history of this Buddha image is traced to India, five centuries after the Lord Buddha attained Nirvana, till it was finally enshrined in Bangkok at the Wat Phra Kaew temple in 1782 during Rama I's reign (1782–1809). This marked the beginning and raise of the Chakri Dynasty of the present Kingdom of Thailand. The Emerald Buddha, a dark green statue, is in a standing form, about 66 centimetres tall, carved from a single jade stone (Emerald in Thai means deep green colour and not the specific stone). It is carved in the meditating posture in the style of the Lanna school of the northern Thailand. Except for the Thai King, no other person is allowed to touch the statue. The King changes the cloak around the statue three times a year, corresponding to the summer, winter, and rainy seasons, an important ritual performed to usher good fortune to the country during each season. While legend traces this statue to India, its rich historical records dates its finding in Cambodia in the 15th century, moved to Laos in the 16th century and then to Vientiane where it remained for 215 years, and finally to Thailand in the 18th century.

After spending a few hours in the temple area, I moved on to the right hand side of the map to the actual Palace that the king lived in. This area had guards all around it, official government buildings, and even had a changing of the guards ceremony every hour.

Posted by Cassi 12:43 Archived in Thailand