All throughout my travels I met backpackers that had set out on 2 month, 6 month or year long journeys across Asia. Everyone seemed to hit the same points: HaLong Bay and Ho Chi Minh City, Tubing in Vang Vieng, Koh Phi Phi and Phuket and most of all KhaoSan Road, Bangkok. This area is backpacker heaven, with guest houses lining the streets above bars and nightlife. Street vendors cover the roads, which are completely closed to cars so travelers don't have to worry about being hit when wandering back home. Anything you want can be found on carts set up each day: from jackets, headbands and mittens made by locals (which I'm not sure why you would ever need mittens in Bangkok....), to every type of beer logo printed on neon colored singlets, to jewelry and hair stylists and tattoo artists. They even have buckets of fried bugs, cooked stingrays and things I couldn't identify. The best part is everything is less than $5 after bargaining. 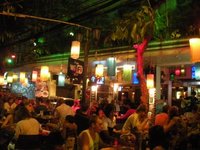 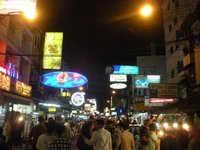 KhaoSan Road is a short street in central Bangkok, Thailand. It is located in the Banglamphu area of (Phra Nakhon district) about 1 km north of the Grand Palace and Wat Phra Kaew. "Khaosan" translates as "milled rice", a reminder that in former times the street was a major Bangkok rice market. In the last 20 years, however, Khaosan Road has developed into a world famous "backpacker ghetto". It offers cheap accommodation, ranging from 'mattress in a box' style hotels to reasonably priced 3-star hotels. In an essay on the backpacker culture of Khaosan Road, Susan Orlean called it "The Place to Disappear."

It is also a base of travel: coaches leave daily for all major tourist destinations in Thailand, from Chiang Mai in the North to Ko Pha Ngan in the South, and there are many relatively inexpensive travel agents who can arrange visas and transportion to the neighboring countries of Cambodia, Laos and Malaysia, as well as Vietnam. Khaosan shops sell handcrafts, paintings, clothes, pirated CDs, DVDs, and second-hand books, plus many useful backpacker items.

There are several pubs and bars, where backpackers meet to discuss their travels. The area is internationally known as a center of dancing, partying, and just prior to the traditional Thai New Year (Songkran festival) of April 13 to April 15, water splashing that usually turns into a huge water fight. One Thai writer has described Khaosan as "a short road that has the longest dream in the world."
A Buddhist temple under royal patronage, the centuries old Wat Chana Songkram, is directly opposite Khaosarn Road to the west, while the area to the northwest contains an Islamic community and several small mosques.

The start of my stay in Bangkok was perfect, a full moon. Thailand of course is known for its full moon parties down in the southern islands, and Bangkok celebrates them the same way. The difference was, rather than everyone drinking from buckets inside the bars, this full moon had everyone out on the streets looking up, so I stopped to watch too. Without even knowing what people were staring at, I realized the moon wasn't full after all like I had expected: it was the night of a Lunar Eclipse. For my first lunar eclipse, Bangkok wasn't a bad place to be viewing from.

I met up with one of my friends from the Vietnam Sapa Valley hiking group who happened to be in Bangkok as well, and some of his new friends he had met along the way for dinner. We went out along the road for the night, and met several other backpackers staying in the same guesthouse as I was. After our night out I caught up on sleep before going to the Grand Palace in the morning.

Posted by Cassi 10:54 Archived in Thailand