Our second day in Chiang Mai we woke up early to head to an Elephant camp. In Thailand, elephants until recently were used in logging camps to drag and lift huge trees after they had been cut down. The government recently put a ban on this, but the elephants could not just be returned to the wild after years under human care. Now, there are many elephant reservations where you can feed, wash and ride the elephants each day. Each elephant has a personal mahout, or trainer, that helps take care of the elephant, and tourists can come to the camp to visit the elephants and take part in their daily routine. 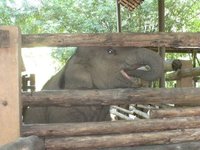 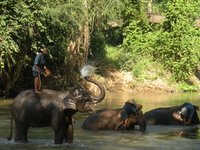 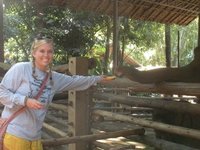 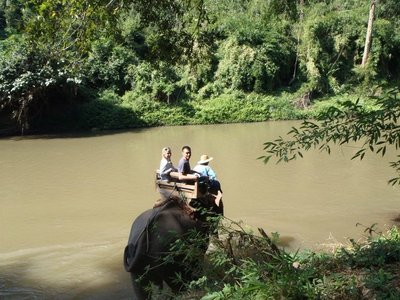 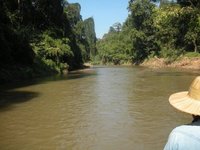 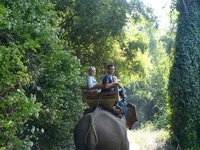 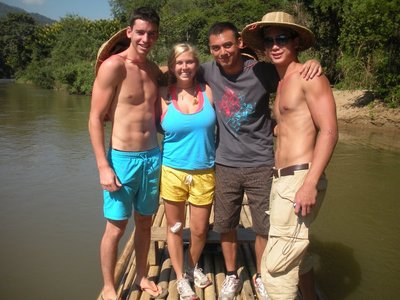 Then it was time for us to ride the elephants! We got to go on an hour ride through the jungle, along a trail and even into a river. It was really awesome sitting on top of an elephant. Sure they look big when you see them in movies, and they look big when you are watching them walk by, but it wasn't until I was sitting on the back of an elephant that I realized how giant they really are!

After the elephant ride, it was time for river rafting. When we saw the description for river rafting, we were thinking there might be some rapids and we would be in a nice inflatable raft, but we were not as lucky. Instead, we were on a bamboo raft, tied together with strings and covered in spiders. It was the four of us: Josh, Ryan, George and I, and we had a little Thai man who was steering the raft with a long bamboo stick. We all got a chance to try guiding the raft, but it was much harder than it appeared. It was actually a very relaxing ride once you could ignore the spiders and accept the fact water was leaking up between the bamboo shoots. 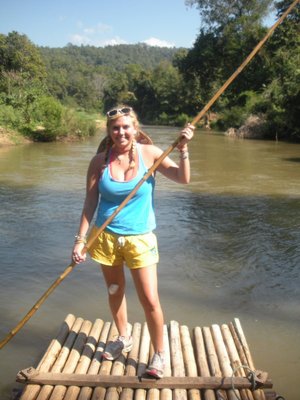 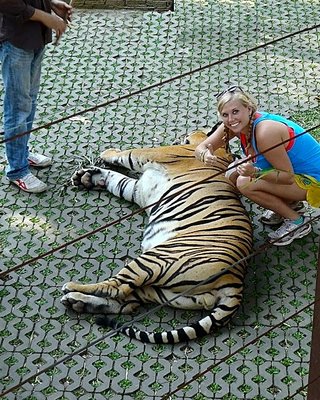 After we landed at the riverbank down stream, we took a van to a place to grab lunch. Without any warning to us, the place was at a Tiger Kingdom, and our restaurant was about 10 feet from the tiger cages. Naturally, they allow tourists into the cages to pet the tigers, and they shut the door behind you so the tigers (and you) can't escape. How many times in my life will I be given the chance to pet a live tiger?! Of course I jumped at that opportunity and bought my ticket (which was only about $10) to pet the full grown adult tigers.

Just like with the elephants, it is hard to believe how big tigers are until you are wrapping your hands around its stomach! That is one memory I will never forget, being shut inside a cage with 4 adult tigers and a little Thai man who claims he can stop them if they attack... Totally worth it! 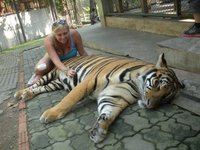 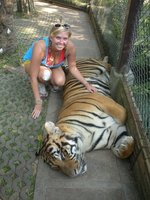 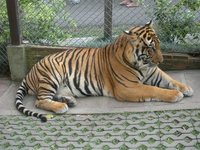 Posted by Cassi 10:48 Archived in Thailand