On the morning of December 12th I landed in Siem Reap, checked into my guest house and I rented a bike (a pedal bike, not a motorbike). I spent the afternoon wandering through downtown of Siem Reap, which consisted of mostly dirt roads on the outskirts, and a few paved ones right in the town center. There were shops, a few bars on Pub Street, and 3 big markets that were within biking distance. But that night I got to bed early to start my adventure the next day.

There is no way to describe Angkor Wat, the description according to the UNESCO World Heritage Site and Wikipedia is as follows:

Angkor is one of the most important archaeological sites in South-East Asia. Stretching over some 400 km2, including forested area, Angkor Archaeological Park contains the magnificent remains of the different capitals of the Khmer Empire, from the 9th to the 15th century. They include the famous Temple of Angkor Wat and, at Angkor Thom, the Bayon Temple with its countless sculptural decorations. The ruins of Angkor are located amid forests and farmland to the north of the Great Lake (Tonlé Sap) and south of the Kulen Hills, near modern-day Siem Reap, in Siem Reap Province, and are a UNESCO World Heritage Site. The temples of the Angkor area number over one thousand, ranging in scale from nondescript piles of brick rubble scattered through rice fields to the magnificent Angkor Wat, said to be the world's largest single religious monument. Many of the temples at Angkor have been restored, and together, they comprise the most significant site of Khmer architecture. Visitor numbers approach two million annually. In 2007, an international team of researchers using satellite photographs and other modern techniques concluded that Angkor had been the largest preindustrial city in the world, with an elaborate system of infrastructure connecting an urban sprawl of at least 1,000 square kilometres (390 sq mi) to the well-known temples at its core. The closest rival to Angkor, the Mayan city of Tikal in Guatemala, was between 100 and 150 square kilometres (39 and 58 sq mi) in total size. Although its population remains a topic of research and debate, newly identified agricultural systems in the Angkor area may have supported up to one million people. 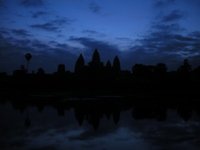 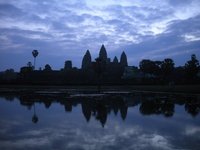 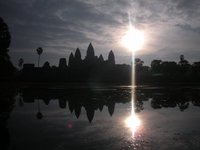 I woke up at 4:30 in the morning to make it to Angkor Wat for sunrise - and it was spectacular. The view is from across the ponds located within the first walls, but outside of the actual temple. After sunrise, my day began. I had a tuktuk driver with me all day, telling me about each of the temples and showing me around the site. It is hard to imagine how big these ruins stretch, and the main temples are impossible to walk through in a single day. I cant even begin to explain how many different sites there are and how much time is needed to see them all. I had gotten a three day pass (which if anyone ever goes you need at LEAST 3 days), and started out on the outer loop for day 1.

Posted by Cassi 15:12 Archived in Cambodia