Back to the Insane!

After Koh Phi Phi we went back to Phuket, this time for a planned visit. However, once again we missed our ferry! After the glow-paint beach party, we over slept and ran to the ferry dock to see the boat had already left. We thought we were out of luck, but we were told we could rent a long boat and try to catch up! You should have seen us: four college kids still covered in glow paint from the night before, climbing onto the ferry in the middle of the ocean, and we clearly had just woken up. People literally were taking pictures of us and laughing. However, we made it back to Phuket on time and everything else worked out fine.

We stayed at Patong Backpackers Hostel, which surprisingly was filled with NUS exchange students who we didn't expect to be in the area. A whole group of us went to the beach for the afternoon and then went out our first night there. We found an Australian Bar that played only the best music: 90's rap. Music in Asia isn't quite up to par with at home, I don't think I have heard a new song since leaving in July. But it makes for a fun night when everyone can laugh at the music being played at bars. After the Australian Bar, we wandered back through the rows of strip clubs, guys selling ping-pong shows, 'ladyboys' and prostitutes and called it an early night. You hear all these crazy stories about things that happen in Thailand, and I can officially tell you- they are all true. 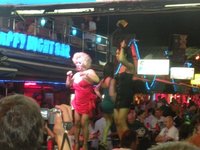 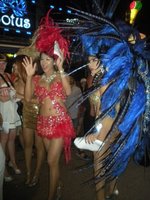 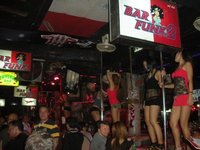 We got up early the next day and rented motorbikes! We figured we would explore the whole island of Phuket, and get out of Patong for a while. We rode up to a private beach, where it was less crazy and more relaxing. After a few hours of tanning, swimming and exploring, we rode our bikes further south to the 'Big Buddha". a huge statue of Buddha built at the top of the mountain. However this ride didn't go smoothly. 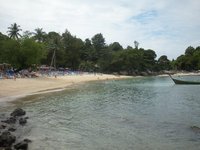 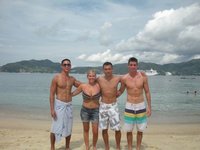 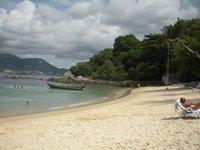 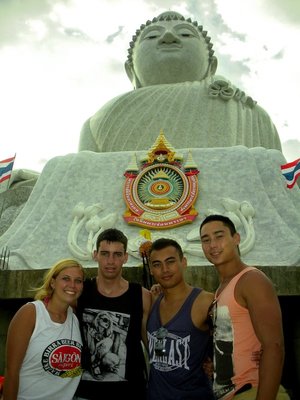 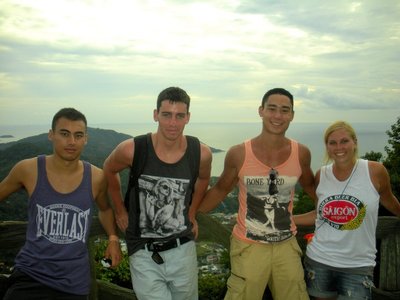 I ended up crashing my motorbike when I hit gravel on a turn going downhill. Not only did I slide into a pile of cut down trees, the bike landed on top of my leg and it was too heavy for me to pick up! Because I was riding last in our group, the guys didn't notice me fall and continued down the mountain. I was saved by a group of guys who own an Elephant Ranch on the mountain! They took me to the elephant farm (not sure what the real name is for an elephant ranch/farm...), got me cleaned up and gave me band-aids for all my cuts and scrapes. The guys came back up the mountain and found me with the elephants!
Eventually we made it to the Buddha, which was indeed big. The views from the top were amazing, you could see all the towns on the island and far out into the ocean. The Buddha itself has just opened, it is even still being built on the inside!

After visiting the Buddha, we rode our bikes to the southern most point on Phuket, trying to catch the sunset. We thought the sunset at like 6:30 in Thailand, but apparently it sets at like 5:45 or 6! So we missed it. But we were still able to grab dinner along the ocean, literally sitting on the ground on the ocean front. It was an amazing dinner 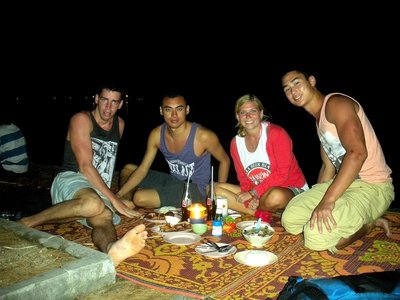 Posted by Cassi 23:27 Archived in Thailand