Getting ready to leave Singapore already!

This weekend a group of students are heading to Tioman Island, a small island off the East coast of Malaysia. I can't tell you much in advance, but I hear the beaches are amazing, and the jungles have all sorts of animals. We are supposed to pick up our Singapore Student Visas today and then leave tomorrow morning.

Here is the description from Wikipedia: 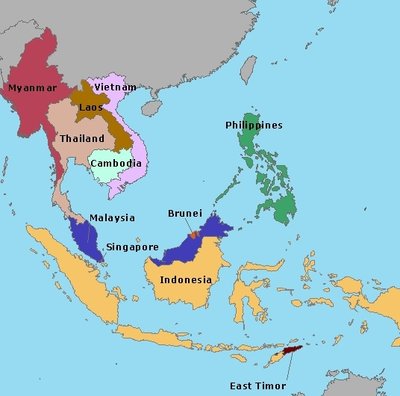 Tioman Island (locally known as Gunung Daik Bercabang Tiga) is a small island located 32 km off the east coast of Peninsular Malaysia in the state of Pahang, and is some 39 km long and 12 km wide. It has eight main villages, the largest and most populous being Kampung Tekek in the north. The densely forested island is sparsely inhabited, and is surrounded by numerous coral reefs, making it a popular scuba diving spot. There are also a lot of resorts and chalets around the island which has duty free status.

Its beaches were depicted in the 1958 movie, South Pacific as Bali Hai. In the 1970s, TIME Magazine selected Tioman as one of the world's most beautiful islands.

Apart from its diverse marine life, the inland rainforest area, encompassing approximately 12,383 hectares, in Tioman is a strictly enforced nature reserve. There are several protected species of mammals on the island, including the Binturong, Long-tailed Macaque, Slow Loris, Black Giant Squirrel, Red Giant Flying Squirrel, Mouse deer, Brush-tailed Porcupine, and Common Palm Civet, from a total of 45 species of mammals and 138 species of birds, including the majestic Frigatebird. Moreover, Tioman has species that are endemic to its shores. The soft-shelled turtle and the Tioman walking catfish are both unique and can be seen on rainforest walks.

The part of Malaysia I am going to is at the bottom of the peninsula, and the island is on the southeast coast. It is only a 3 hour bus ride from Singapore, and then a 2 hour ferry from the town of Mersing to reach Tioman Island.

Posted by Cassi 20:15 Archived in Malaysia