Kourtney flew from Hanoi back to Singapore for her Final exams on Saturday, but I still had a week of traveling before I had to be back at school. My next stop: Luang Prabang, Laos. 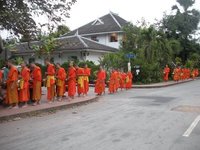 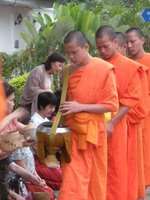 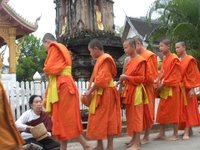 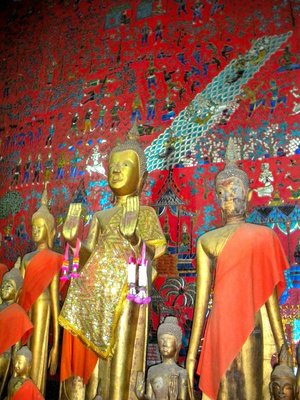 This small town in Northern Loas is a UNESCO World Heritage Site, with old french villas and bakerys lining the street, and more temples and wats than you can imagine. Monks wander the streets everywhere you look, and one even stopped to talk to me. He asked where I was from and where I had been. He has never left Laos, but is trying to learn English so one day he can travel too. He was only 17 years old but had lived as a Monk since he was just 13. The town center is surrounded by water, by both the Mekong and the Nam Khan Rivers, and in the middle there is a small mountain with a temple at the top that you can climb to.

I had read in all my guide books that Luang Prabang is famous for Monks, and you can walk outside and see them every single day. When I arrived at my guesthouse and asked about it, the owner told me I would see more Monks than I could image if I just walked down the road, and he wasn't kidding.

At dawn each morning the Monks begin their daily walk to collect alms on the way to the temples. I got up my first morning at 6am and walked down the street expecting to see a few Monks walking by. There were hundreds of them in every direction walking in straight lines collecting alms from hundreds of people lining the roads.

Since the sun was up and I had already watched the monks for about an hour, I decided to walk along the Mekong River. Early in the morning the mountains are still covered in with low clouds and the river has fog along it, but later in the day you could see the mighty Mekong flowing by. From there I opened my guide book and set out in exploration of the town, hoping to see everything I had read about in my books.

My first stop was Wat Xieng Thong, a beautiful gold temple located at the end of the peninsula by the two rivers. Next I walked along the road and found a place for breakfast: eggs, a french baguette and orange juice! I was so happy for the french influence in this town, you cannot find a breakfast like that in Singapore for so cheep. The rest of the morning was spend at various temples and the national museum. 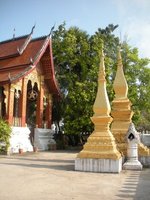 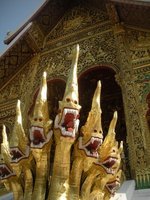 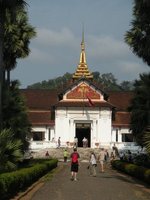 After lunch I climbed to the top of Phu Si (the mountain with the temple on top in the middle of the town). There is a beautiful view across the Mekong into the hills of Laos, and the temple at the top is fun because the monks that live there were walking around talking to visitors. 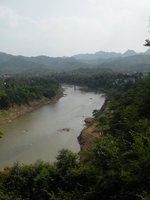 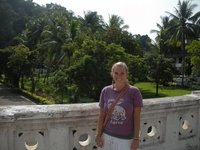 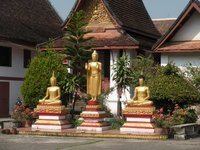 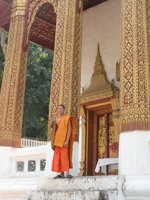 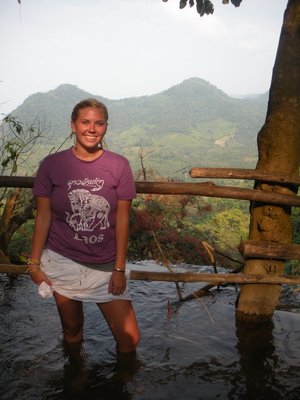 I saw a sign for day trips while walking through town in the morning, and decided to check out the options. I found one that sounded like a lot of fun a signed up. So, in the afternoon I took a tuk tuk to the Kaung Si waterfalls with a few other girls who were traveling through the area. One girl was from New Jersey, but had just finished a two year Peace Corps assignment in Micronesia, and the other was from Sydney just touring through.

Once we got to the falls and saw how beautiful they were we decided to climb to the top of them! There was a side trail that literally was climbing up straight up, I was in a long skirt and flip flops and could barely make it up this path. But the view from the top was amazing, well worth the effort (And of course I knew my parents would love the pictures of me sitting on the little wooden fence at the top!).

As I did the first night there, I spend my second night at the night market. This is an endless street of stalls set up at sunset, where you can find anything from shirts and jewelry to wood carvings. Of course I bought more than I could carry, including hand made journals that I plan to turn into mini-scrapbooks from each of my little trips during this semester. 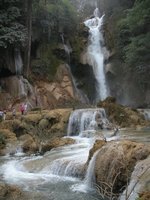 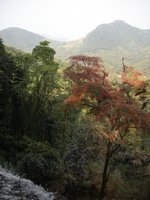 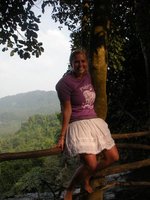 Posted by Cassi 16:42 Archived in Laos